The End of an Era

The End of an Era 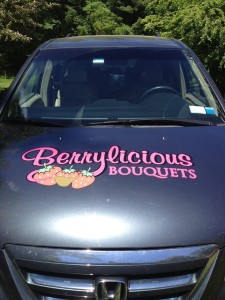 It is the End of an Era here in the Allitt household. We have decided to get Mommy a new car. We have been talking about a new car for me since 2012 and I keep putting it off. After nearly 160,000 miles and 10 years of use, I had to cave in. We purchased the mini-van brand spankin’ new in 2005, Cass was a year old and Caden was just a newborn. I never would have thought that a car could hold so many memories and emotions. We have gone from being infants in backwards, 5 point harness car seats to Cassie being 5’1 and being able to sit in the front seat (although she hasn’t yet). We have experienced so many milestones in that car. The van has been pretty beat up, between changing diapers, trips to the ER with blood flowing, potty training, bottles opened and dropped, the 1 million goldfish crackers ground into the carpet, to the present day where the car is full of kids and their “gear” for sports and drums and full of chocolate for Berrylicious Bouquets.
“The Van” has seen kids loose teeth, get braces, have casts put on, made many trips to the Dr’s office, driven kids to pre-school, and car pooled with many. It has taken us on SO many “Allitt Secret Adventures” and we have seen the kiddo’s look out the window with wonder and awe trying to figure out where we were headed and scream with excitement when they figured it out.
In the time I have owned “The Van” I have changed as much as the kids. I have gone from a very frazzled mom who had 2 children within 14 month, now turned into a local business woman running her own little Chocolate World right from her basement. The confidence that I have now compared to 10 years ago is really a day and night difference. In 2005 I fell like my day was a success if I kept these 2 little precious souls alive…(lol, but totally true!!). Today in 2014 I am over 2 years into owning my own business and “The Van” had been the Berrylicious Mobile, plastered with my logo and making deliveries all over the capital region. I am learning everyday, but I now have the confidence to “Go After It!” and accomplish my goals.
The kids in 2014 are 9 and 10, Big kids now, playing sports, drumming in rock bands, going to school and don’t need mommy quite as much as they once did. They were involved in the car purchasing decision and are happy with our replacement. Cassie wears a size 10 sneaker(insane!!) so her big thing was having enough foot room, 2 cars we looked at got rejected just for that reason. They now have opinions, thoughtful idea’s, and want to be included in family decisions.
So as the Hubs and I “Trade In” this part of our life, we are excited to see what adventures the next car brings us:)

Yesterday was quite a day. Elaine Houston from Channel 13 came to interview me for a piece on... read more

Berrylicious Bouqets is really chugging along. We have added new products and new places to purchase them. ... read more

Berrylicious is closed until March 5th for a vey good reason. We are traveling in Europe for a... read more

And the Winner is…….

On May 2nd Berrylicious Bouquets attended the Bacon, Brews, and Brims Kentucky Derby Party. It was held as... read more

Just a quick note to say THANKS to everyone that ordered a chocolate covered strawberry bouquet, Berrylicious Goodies, or... read more

Valentine's Day is coming up quickly!! We have many options for yummy gifts that ship nationwide! Our... read more

Last month I was planning a party for my children ages 8 and 9. I was trying to... read more

Berrylicious Bouquets has been closed for the last 2 weeks for a much needed vacation.  We have traveled through... read more

Ideas for Edible Bouquets and Goodies

Chocolate, the quintessential comfort food. An edible bouquet of chocolate covered strawberries is appropriate for any occasion. From Thank... read more

The weather here in upstate NY during mid-late August can really make you think about Autumn. The days... read more